0
The words Bonfire Night always give me a heady trip of nostalgia. For years, bonfire night meant the big church bonfire on the disused car park on Carr Road in Nelson. The fire was massive, and as children we would wait for the smoke to blow sideways across the carpark and then run through it... / READ MORE /
/ Cathy /

The words Bonfire Night always give me a heady trip of nostalgia. For years, bonfire night meant the big church bonfire on the disused car park on Carr Road in Nelson. The fire was massive, and as children we would wait for the smoke to blow sideways across the carpark and then run through it to the other side, gasping for clean air – that was our idea of fun in nineties! Hot food was wrapped in tinfoil and deposited into pockets to act as hand warmers, and our faces were sticky with toffee apples. We wrote our name with sparklers and waited for what felt like a life time for each firework to be lit and released in to the sky whilst everyone oooh’d and aahhh’d in perfect unison. The spectacle of three big rockets being set off at the same time was always saved as the big finale of the night. I would go home, loving the smell of woody smoke that lingered in my hair.

Unfortunately the church bonfire night came to an end several years ago, and Rob and I haven’t been to one since we got married seven years ago! So this year, when our friends asked whether we wanted to go to Thornton Hall Farm’s bonfire and firework display we jumped at the chance. At last, Orla got to experience her first real firework show. We have been so excited about this night, and I thought I would give you a round up of how it went.

Booking was a doddle on Thornton Hall’s website. Although I did have a bit of hesitation because of the price. Adult tickets were £10, children £8. Which meant the tickets alone cost us nearly £30 and I knew once we were there we would be spending extra on food or drinks. However, the farm is an amazing place and I know ticket sales from things like this keep it going, and I was looking forward to going with out friends, so I do think the price isn’t too bad.

When we got to the doors the ticket system was running very smoothly, and despite the event being fully booked we didn’t have to queue at the entrance at all. At the doors there were clowns juggling and doing circus tricks so if queues did develop there would still be things to keep you entertained.

The event started at 6pm but they didn’t light the fire until 7pm, which I thought was a little weird. They made a big thing of it being time to light the bonfire but I’d have had the fire lit sooner and given people more time to enjoy it’s glow. As many people had young children with them there was a mass exodus about 8pm, and the fire was probably still going to be burning strong for another three or four hours.

That gripe aside, there was plenty to keep us entertained for the first hours. Two girls were performing with fire sticks and fire breathing, there was a big adventure playground, a small kiddies roller-coaster, llamas to meet in the barn, a band playing, food stalls and a working fire engine to explore. We had a good wander around and enjoyed our first mulled wine of the season. 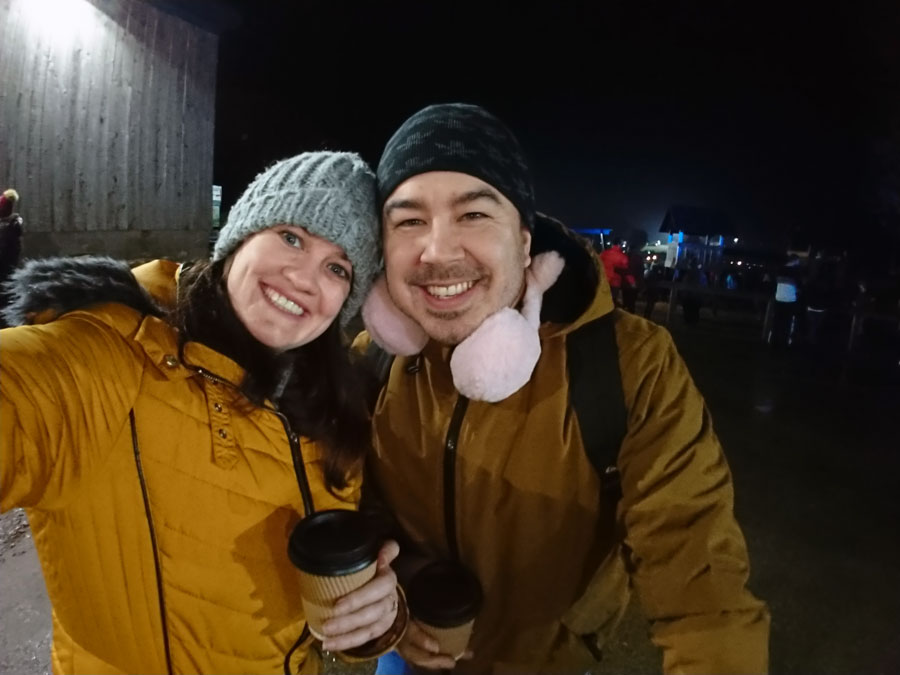 First off, this was a very safe event. The fire itself was in a field fenced off the crowds but was still big enough to give a good warmth when you were standing along the fence. The fireworks were set off at the other end of the field and wherever you stood you would get a good view.

The fireworks were incredible. It was about twelve to fifteen minutes of constant star explosions set to music. I have seen videos of displays like it on telly but this was my first time being there in person and it was incredible, the finale was like being showered in multiplying stars. For me, the quality of the display justified the ticket price alone.

I was a bit anxious for Orla as this was her first firework show and she can get scared of loud noises (hand dryers in toilets being her number one nemesis). We had a brilliant spot for watching the display, right by the fence with a spot for the two girls to see unobstructed by anyone else. As the countdown started to the fireworks I couched down next to her so that I could watch her reaction and make sure she was OK. I need not have worried, I didn’t see the first few fireworks but I saw Orla’s face lit up in pure wonder and just heard her little voice gasp as the first rockets soared above us. After that I whipped out my phone to quickly film her reaction for the next few minutes, whilst we watched the display. It does not make for eventful footage, Orla stood stock still soaking it all in, with just a flicker of a smile here and there. She was utterly mesmerized. 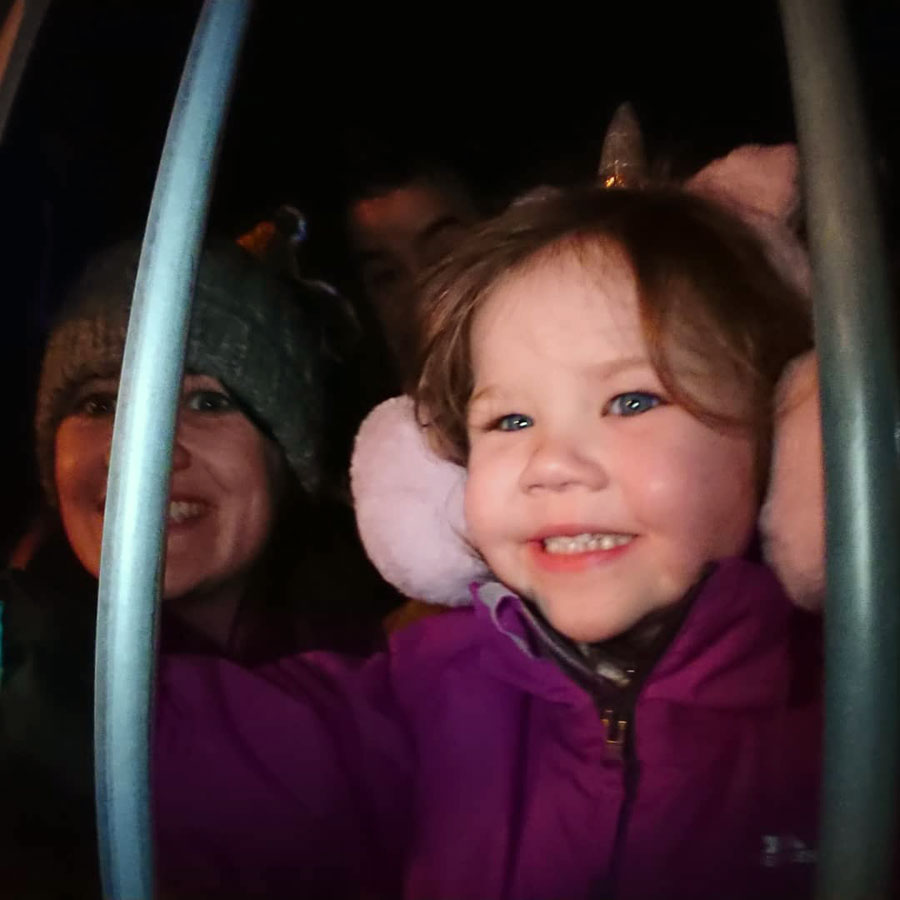 The One Duffer of the Night

The only serious complaint of our night that did negate some of our enjoyment was the parking situation. When we arrived all the cars were being directed on to a sloping field to park (although, if people had any accessibility needs they were being directed to the usual car park). It had been drizzling all day, and although the weather had dried up beautifully for the evening, the field was very muddy. As we got out of the car and heading in to the farm our friends and I all had the same words on our lips; ‘I hope we will get out of here, OK.’

After the fireworks had finished, we let the girls have a ten minute dance party in the mud and then headed back to the cars. The field was a chaotic mess of queued cars, stuck cars and people jumping in and out of cars to help push other people out of the mud. We got stuck twice ourselves and had to be rescued by other guests pushing us out. I think it took us about forty minutes to get out of the field and it was quite a stressful forty minutes at that because you never knew at what point the car might get stuck again.

If we were to go to another event at the farm, we would definitely park along the road and walk the extra ten minutes to the venue, especially if it had been a rainy day!

It was an experience worth having and a well run event, I am really glad that we went and it was fantastic for Orla’s first firework display. As good as it was though, I think next year I will look for a smaller, more local bonfire night to go to. I think this event has whetted my appetite for a more rustic community bonfire night, the firework display might not be as extravagant but I would be willing to trade that for more time around the fire, cheaper entry tickets (which means more money to spend on food!) and less fraught car parking!